‘After the first McDonald’s strike, things started to change in my store. For the first time people saw us fighting – and winning’

McDonald's staff from Cambridge take their strike to Westminster
×

WORKERS in Britain’s catering and hospitality industry have suffered decades of exploitation, including low pay and uncertain hours.

Now they are fighting back. The Bakers, Food and Allied Workers union (BFAWU) is organising at fast-food chain McDonald’s. 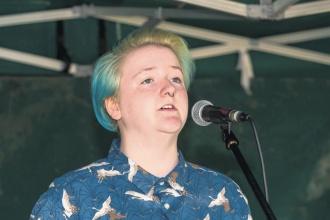 In September, strike action took place at McDonald’s outlets in Cambridge and Crayford, in the first strike in the 44-year history of McDonald’s in Britain. More strikes followed last month at five outlets, including two in Manchester.

The workers are not asking for the impossible from McDonald’s — just a £10-an-hour minimum wage and the option of fixed-hours contracts.

They also want an end to age-related pay, where younger workers are penalised financially by the company for simply being what they are — younger workers.

As things stand, the zero-hours contracts the young workers suffer leave many unable to pay their rent if they’re not given sufficient hours work in any month.

A mortgage would be out of the question, so some McDonald’s workers band together to share a house or a flat. It’s the only way they can keep a roof over their heads. Others have been evicted for being unable to pay their rent.

So far the strikes have involved small numbers of McDonald’s workers, but they have had widespread support from other unions and the public and union membership is growing.

In addition, the strikes are part of a struggle against McDonald’s taking place on both sides of the Atlantic and beyond. In the United States the Service Employees International Union (SEIU) is campaigning for a $15 minimum wage.

The protest was part of one of several Global Days of Action staged by McDonald’s workers. Such is the international nature of the workers’ struggle.

Among the Manchester strikers on May 1 was Lauren McCourt, a 23-year-old newcomer to union activism. She is a fast learner.

She told the Morning Star: “I’m a McStriker from Manchester and on May 1 2018, I participated in a national strike of McDonald’s workers for £10 an hour regardless of age, fixed-hours contracts and union recognition.

“I’ve lost count of the number of times young people I work with have asked me what a union actually is. They’ve genuinely never heard of one before. I’ve tried to explain it in basic terms, ‘They protect your rights at work. They’re there to help you if you ever get into any trouble.’ They’ve always said ‘OK’ and shrugged because that response just doesn’t excite them. No-one here ever expects themselves to get into trouble at work. Joining a union would be wasting money for something that’s unlikely to happen.

“After the first McDonald’s strike last September, things started to change in my store. That’s when people started to show interest because for the first time they were seeing people just like them fighting against the exact same issues that they have — and winning. The first strike resulted in the largest pay rise at McDonald’s in over a decade.

“I started to realise that for workers like us it’s not enough to have the union as an insurance policy. We need our union to be about identifying the changes we need to make in our workplaces and actively fighting together to make those changes happen. We’ve grown in size since the first strike and that’s because more and more young workers are seeing that, when we unite and fight in our workplaces, we can get higher wages and better contracts and better working conditions.

“They’ve never even thought of that before because they’ve grown up post-Thatcher at a time when unions aren’t fighting like they used to. That’s the reason our wages are so low to begin with. We are in workplaces made up of individuals. When we stand by ourselves and not together in a union, it leaves our employer free to exploit us as much as they want.

“In the last couple of weeks, TGI Friday’s workers have been striking against low pay and tip theft. They said they were inspired by the McStrike and they’ve been copying our chants on their picket lines. We can already see what happens when you get out there and fight together, it inspires others like you to do the same.

“We’ve grown out of the Fight For $15 campaign in the US where they’ve managed not just to raise the wages of fast-food workers, but they’ve doubled the legal minimum wage from $7.25 to $15 in several states. That’s exactly what we’re fighting for. The issues we struggle against — working on zero-hours contracts, low wages and youth pay rates — are the same issues that millions of other people in this country face. We’re fighting for all of them. This is where it begins.

“I hope they see what we’re doing and get inspired to do the same because, when we stand together and use our strength in numbers, we will always have more power than those who mistreat and exploit us. That’s when we will win — when we stop accepting less than what we deserve and we stop waiting around hoping that things will get better on their own.”

Ronnie Draper is the BFAWU general secretary. He agrees with McCourt that the action by McDonald’s workers in the United States has inspired workers here.

But he says there’s much more to the struggle of workers in Britain than that.

“The fact that we have poverty wages for young people in the fast-food industry was the other inspiration and nobody was doing anything about it,” he says.

Draper says that the McDonald’s struggle is not just about young workers, though many have been at the heart of the strike action.

“McDonald’s are not bothered who they exploit. All they are bothered about is what comes into their coffers. This is the second-biggest employer in the world and probably the biggest serial exploiter of workers’ rights in the world.

“It is a company that counts its profits in billions not millions.
But he accepts that the trade union movement did need to be aware that young workers are vital to its survival.

“As a union we are affiliated to the Unions into Schools initiative in Scotland.

“You cannot have any organisation that only thrives on the last of the older people. Unions have got to change otherwise we only represent people from the past. We have to listen to what young people want.”

Going back to the McDonald’s issue, he said the campaign is growing.

“We have young organisers out recruiting as we speak,” he said.

The BFAWU annual conference is taking place in Southport and the McDonald’s campaign will be high on the agenda.

The presentation of the union’s Youth Award will also be on the agenda. It will go to McCourt and will be presented to her by Labour leader Jeremy Corbyn.

She is nothing if not ambitious.

“When we start to use our collective power in our hundreds and thousands and millions we will be unstoppable,” she says.