Counter-protesters dwarfed the DFLA thugs by a thousand

Anti-fascist campaigners march in London against the DFLA
×

FASCIST thugs gave nazi salutes and attempted to attack counter-protesters this weekend – but they were vastly outnumbered by counter-demonstrators.

The outnumbered ranks of the Democratic Football Lads Alliance (DFLA) tried to force their way through police lines yesterday but were held back by mounted officers and vans. 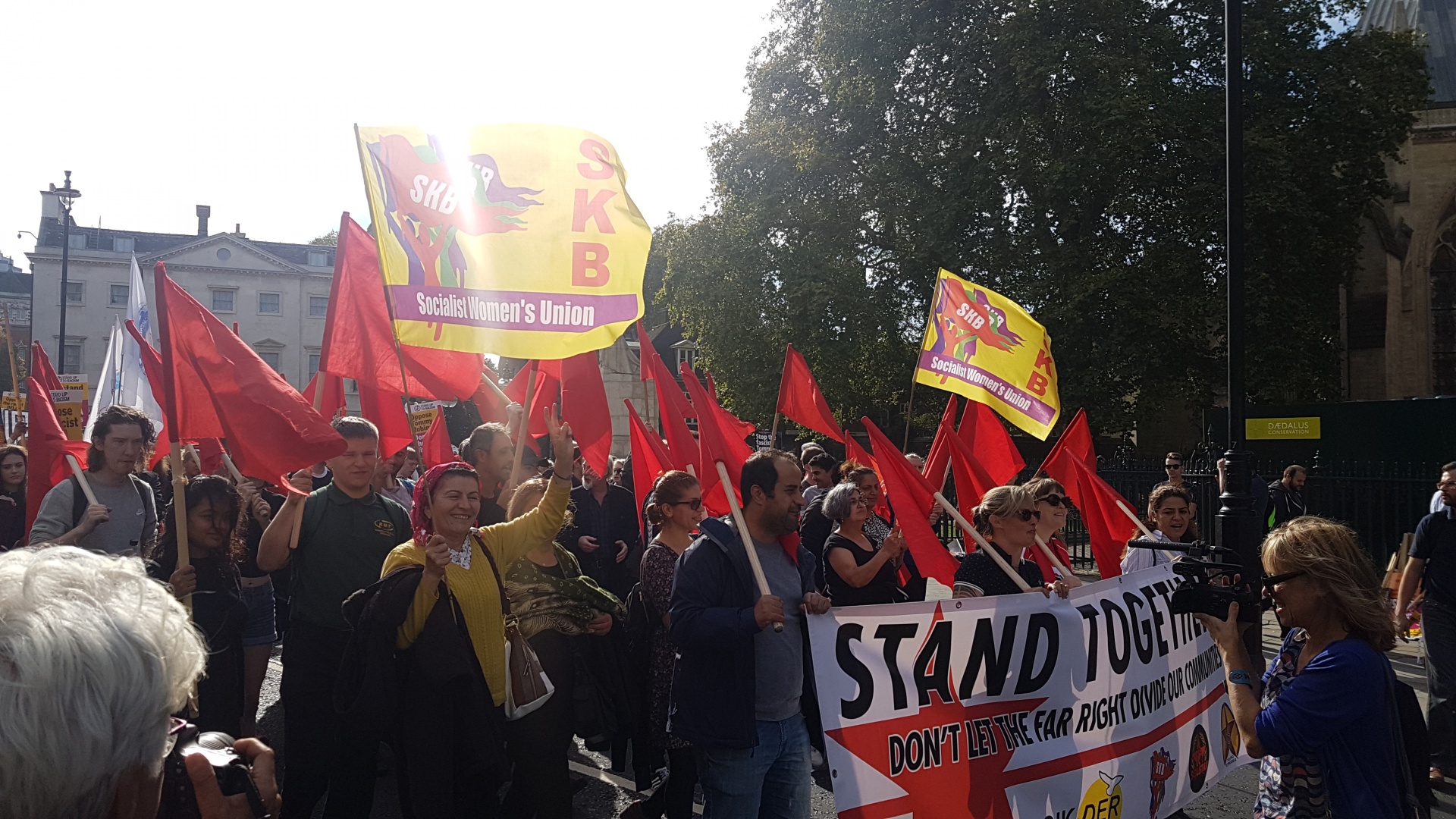 Up to 1,000 supporters of the DFLA turned out for an anti-Islam march, with some seen performing nazi salutes. An estimated 2,000 people opposed them in different counter-protests.

Stand Up To Racism (SUTR) co-convenor Weyman Bennett told the Star: “The fascists tried to break through behind us at Westminster. I think they were the Chelsea crew. They didn’t get through, but they tried.”

DFLA supporters marched from Park Lane to Whitehall, with their route blocked by members of the Anti-Fascist Network. Some of them started to break free from police horse escorts on Pall Mall.

Dozens were seen fighting with baton-wielding officers, with one threatening a policeman while being restrained by other marchers then screaming: “I’ll kill you.” 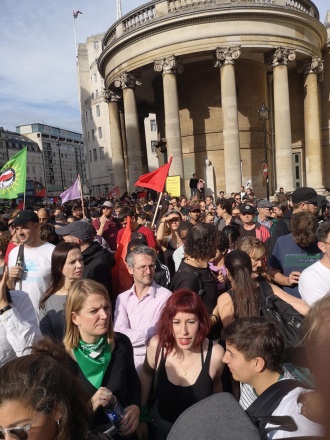 Police said there had been one arrest. By the time the DFLA reached a rallying point for speeches there were reportedly only about 100 fascists remaining.

The counter-protesters included trade union members from Unite, RMT, the National Education Union, the University and College Union and the Communications Workers Union.

A rally by counter-protesters was given a joint message of support by Labour leader Jeremy Corbyn and shadow home secretary Diane Abbot, congratulating the demonstrators for standing up to racism and far-right extremism.

“We’re in solidarity with all those around the world standing up to oppose racism and to support the diversity of our communities,” the politicians said.

“We’re proud to walk in the traditions of anti-racism campaigners and activists. Your fight is our fight.”

Labour MP Emma Dent Coad told the rally: “We cannot stand by while Islamophobia and racism of all kinds is being normalised.”

She said that it was evident even in the House of Commons.

“It is despicable, it is disgraceful, we cannot stand by and let this happen," she added.

Unite regional secretary Pete Kavanagh told the rally: “Unite believes that all workers and all working-class communities need a strong voice – especially in a world where the political elite has for too long ignored our needs.

“We also believe that unity and hope are necessary to deliver decent housing and opportunities for all.”

David Rosenberg of the Jewish Socialist Group said that the anti-racist protest was evidence of an alliance against the far-right.

“Trade unions, Labour MPs, Muslims, Jews, black, white all ages, all genders, and we can win,” he said. “But we won’t win unless we build an anti-racist and anti-fascist majority in society.”

The DFLA claims to be mobilising against terrorism and sexual abuse, but anti-racism campaigners have said it was clear their real intentions are to “whip-up hatred” by demonising the Muslim community.

The group has said nothing about the conviction of leading English Defence League (EDL) member Peter Gillett, who was sentenced to 18 years on several accounts of rape, indecent assault, actual bodily harm, gross indecency and cruelty against children aged eight  to 15.

Recent protests by the DFLA in support of former EDL leader Tommy Robinson have led to attacks on mosques, senior trade unionists and a socialist bookstore.

The British army is currently investigating photos and videos posted by Mr Robinson of him posing with serving soldiers, with one soldier being discharged as a result.

Campaigners say Mr Robinson and the DFLA are looking to recruit from services personnel in pursuit of their far-right agenda.

‘It’s up to me’: AJ will decide when his boxing career ends

Can Labour remain the party of labour?