LONDON Books is justifiably gaining a reputation for reprinting classic but neglected 20th-century works set wholly or in part in the British capital. 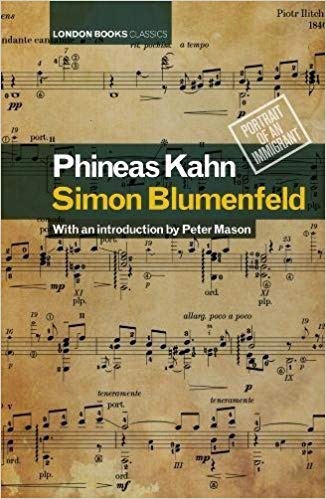 From the idiosyncratic Gerard Kersch to the realism of Robert Westerby, they are a direct reminder of a city awash with social change, economic extremes and the ever-present subtext of exploitation and violence.

Simon Blumenfeld’s novel, the second in a loose trilogy, is a universal narrative of the immigrant experience, with the novel starting before the eponymous protagonist is conceived. Indeed, the fiction spans a number of generations of the Khan family but the focus is mostly on Phineas.

Growing up in a predominantly Jewish settlement in Russia during the late 19th century, the musical and literary Phineas lives a comparatively quiet life until he is conscripted into the tsar’s army, when his journeys and travails begin.

Stationed in Warsaw, he and his fellow Jews suffer not only the generalised mindless brutality of the army but the additional burdens imposed by an anti-semitic culture.

In one passage, a general is so moved by his music-making that he enquires how he might help the young man, only to retract the offer when he learns of Phineas’s Jewishness.

Escaping from all of this, he flees firstly to Vienna where the absolute poverty alternates with occasional weeks of subsistence living, thanks to his playing the violin at cafes across the city.

He’s joined by his wife Shandel and Phineas’s family believe the only option in securing a modicum of economic security is for him to move further west.

Thus they arrive in London, where over the years his family experiences the depredations inflicted on the working class by unbridled capitalism — lack of food, slum housing, insecure and humiliating work, poor health provision and the well-meaning but patronising support provided by bourgeois Jewish relief agencies.

Yet Phineas and Shandel have souls of iron and never succumb to despair as they seek to support their rapidly growing family. Phineas plays one exploitative boss off against another, travels to the US for a time to boost the family’s prospects and witnesses the academic and professional successes of the couple’s elder children — sadly, not before Shandel dies.

This is certainly a powerful account of the immigrant odyssey but it’s not a structurally balanced book. As the novel pushes on into the interwar period, the progress of Phineas’s children is unevenly considered.

The fate of his daughters — one leaves for the Soviet Union — are only sketched out, while the protracted and enervating illness of Michael comes to over-dominate the last third of the book.

Such unevenness doesn’t detract, though, from this being a 20th-century classic and its reprint is an important literary milestone.

Hinch hopes to do it all over again

Retaining title could be easy for ‘chilled-out’ Peaty

Three-quarters of fans feel ready to return to football stadiums