THE SO-CALLED war on terror the West has been waging since 9/11 is “a joke,” says historian Mark Curtis in this updated edition of Secret Affairs, first published in 2010. 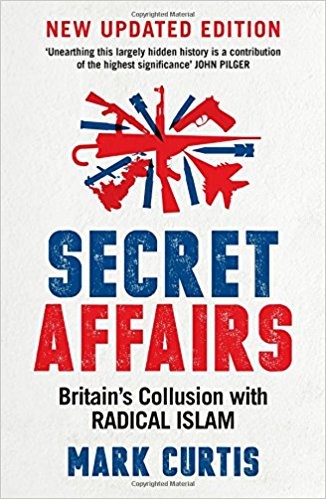 Rather than the self-serving narrative endlessly repeated by Western governments and a credulous mainstream media Curtis underlines how, in the pursuit of foreign policy and commercial interests, Britain has colluded with radical Islam for decades.

Its support has gone to two sets of actors — major state sponsors of jihadist terrorism such as Pakistan and the theocratic monarchy in Saudi Arabia and extremist movements and organisations.

Britain's relationship with the latter has tended to be “a matter of ad hoc opportunism,” Curtis argues, with Whitehall working with Islamist groups to counter what a Foreign Office official in the 1950s called the “virus of Arab nationalism.”

With this pan-Arab movement threatening its control over the Middle East’s vast energy reserves, Britain covertly connived with Islamist forces to overthrow the elected prime minister of Iran, as well as attempting to bring down President Nasser in Egypt and the Syrian government and there's a welcome section on how Britain fought on the same side in 2011 as radical Islamist forces in the Nato war to overthrow the Libyan government.

Curtis also highlights how Britain has bolstered its “longstanding special relationship” with Saudi Arabia despite — or arguably because of — the kingdom’s military intervention to prop up the Bahraini royal family in 2011, along with its ravaging of Yemen over the past three years.

Most devastating of all in this thoroughly researched book is the chapter on the British-US intervention in Syria. According to The Observer’s Simon Tisdall, the West has been “hovering passively on the sidelines in Syria,” but Curtis notes that, “beginning in 2011, Britain embarked on covert operations to overthrow the Assad regime.”

It has worked closely with those great democrats the Saudis to arm the rebels, knowing that there was a good chance the arms would reach the Nusra Front, Al-Qaida’s branch in Syria.

Alongside Christopher Davidson’s 2016 book Shadow Wars, Curtis has written the most detailed and critical account of the West’s dangerous actions in Syria, which have both prolonged and escalated the conflict.

In a world full of Western government-created propaganda, Secret Affairs is absolutely essential reading for anyone who wishes to understand the reality of Britain foreign policy.

HMP Peterborough locking up women prisoners for about 23 hours a day, inspectors reveal

Melting the ice in Moscow

Workers' rights should be treated as a health issue

Sir Keir gets the boot from pub