IN THE 36 years Martin Rowson has been cartooning professionally, his work has appeared regularly in the Guardian, The Times, The Mirror and, of course, the Morning Star which, he laughs, “has managed to exploit my surplus value very effectively.” 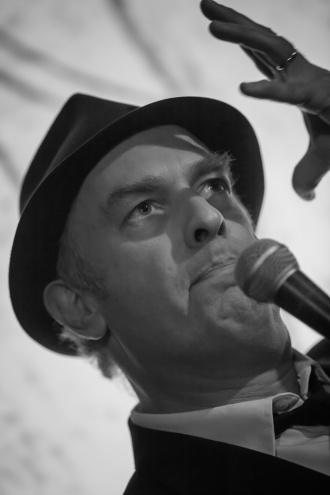 When Rowson and I meet in a Greenwich eel and pie shop to discuss his extraordinary new comic-book adaptation of Karl Marx and Friedrich Engels’s The Communist Manifesto, I want to know what inspired him to create the book.

“I found The Communist Manifesto completely explicable when I was 16. It all made total sense. It made me look at history differently,” he explains.

“I was a public-school proto-punk and I’d had a lifelong obsession with the Soviet Union, I think because my father, who was a scientist, went to a lot of scientific conventions there when I was very small and it was this other place which you couldn’t go to, which was mysterious and strange.”

Marx’s greatest achievement in The Communist Manifesto, Rowson maintains, “is not about dialectical materialism, it’s about human beings being commodified, which is still relevant, which is why it’s worth doing the book.”

Rowson had toyed with several ideas to depict Marx in comic-book form before, but, for one reason or another, they never came to fruition, but, when graphic novel publishers SelfMadeHero approached him with the idea of adapting The Communist Manifesto, Rowson realised that this was the book he should always have done.

Its first part sees Marx and Engels journey through a beautifully grotesque and darkly satirical 19th century landscape past rivers of blood and clunking machinery as the bourgeoisie gains power over the landed aristocracy and proceeds to brutally exploit the working class.

“I got it in my head straight away — this massive tectonic clash of classes and history which, as it turned out on the page, became this massive clunking steampunk thing building up to a crescendo. 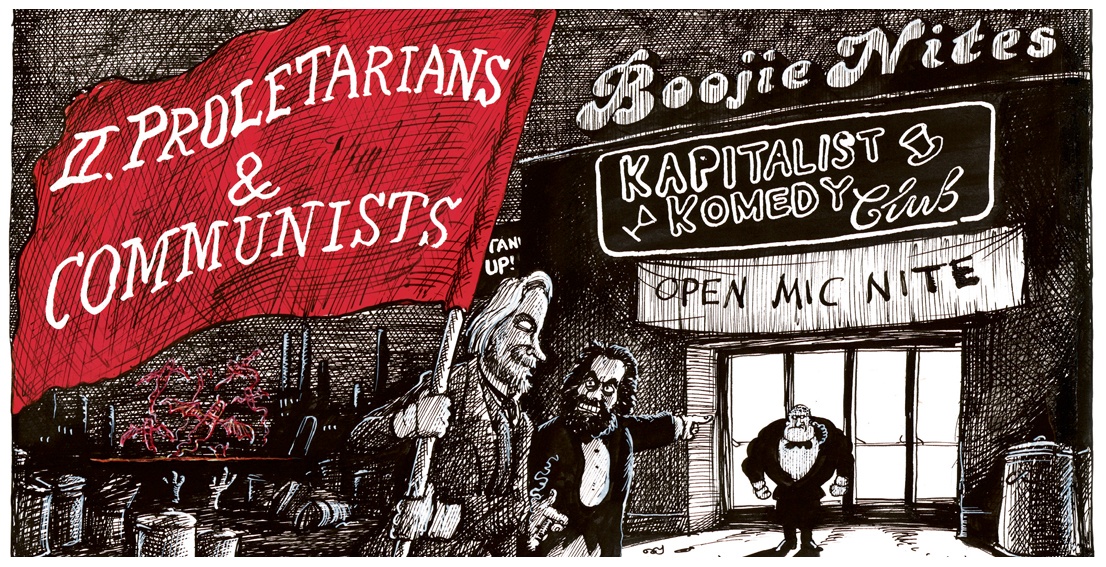 “I was trying to get mental images of Marx’s words. So, when he talks about ‘the history of all hitherto existing society is the history of class struggles,’ you need an image of that.

“And I got the idea of the ‘acme dialecticalator.’It’s the grinding wheels of history and we see how the class system is created by a mixture of molten iron and blood.”

When Marx talks about manufacturing being replaced by the giant of modern industry, Rowson thought: “OK, let’s have a giant called Modern Industry,this enormous robot who shits and wanks and pisses and what’s wrong with that?”

Where did the brilliant idea of drawing Big Ben as the robot’s penis come from? Rowson quotes Marx. “'The executive of the modern state is but a committee for managing the common affairs of the whole bourgeoisie.’ The words are Marx’s, the drawings are mine. He would have approved of this.”

Along with the giant Modern Industry, another fascinating aspect of the book is the toilets with Victorian cash registers for heads, which scoop people up and flush them out behind.

These, Rowson tells me, are the means of production. “Capitalism is about making money, that’s all it is. It’s a brilliant way of wresting power from the landed aristocracy by saying that money doesn’t even exist. It’s about future money. It’s a kind of spiritualism. It’s about something that hasn't happened yet. As Marx says, everything melts into air.

“I wanted to get some way of suggesting that, first of all, the making of money is just about making money, that the last eight years in this country has just been about making money. It’s treating this country as a salvage operation, making more money for the already rich but also the cost in human misery. So you have these toilets that treat people like shit. I just went for the obvious gag. And they’re just great to draw.

“The basic sense of humour can be typified by this noise,” he says and mimics a farting sound, “which is the noise shit makes when it comes out of your body. “ Any child over the age of one will laugh at that because if you didn’t laugh at that, you’d go mad with existentialist horror at the stuff pouring out of your body on a daily basis. And that’s what humour is about. Humour is laughing at the dark side.

“My whole career as a satirist is based on the notion of laughing at the crimes committed by these arseholes because, when you laugh at them, as Orwell said, every laugh is a tiny revolution.

“It’s the wonderful Jewish gag — he thinks he’s better than you, but he shits and he’s gonna die. That’s true of Donald Trump, Theresa May, Margaret Thatcher, Karl Marx, Vladimir Lenin, Kim Jong Un and everybody. They’re basically just the same as you or me. They shit and they’re going to die.”

Towards the end of the book, Rowson has Marx and Engels charging forward from a barricade into a storm of bullets, a la Butch Cassidy and the Sundance Kid, shouting: “Working men of all countries, unite!”

On the next page, a statue of the pair is covered in bird shit, which grows to consume the pair and form the face of Joseph Stalin, then melts away into Leonid Brezhnev’s face before the bulldozers tear it down to make way for the bourgeoisie’s glass towers once again.

“Of course you mustn’t be an uncritical friend of Marx,” Rowson says when I ask him about the end of the book. “The Soviet Union was not as Marx would have envisioned it. As far as I believe, he just hated the exploitation of people. Leninism in practice was this hierarchical system and also dependent on using the bludgeon of the state. And so I had to make some comment on the Soviet Union.

“My beef with Marxism, as much as I’ve got one, is because it was so brilliantly simple, it lent itself to the simplification of things that are slightly more complicated. But also that it was hierarchical, which is why you got Stalin and a society where everybody is being told what to do all the time.

“But surely, the human struggle for freedom over the last 5,000 years has been to stop having people telling you what to do and to agree together to do things together. That’s the point.

“People say to me: ‘You must be the most cynical person alive because you do these horrible drawings of politicians.’ No, I’m one of the most idealistic people I know, but I’m permanently disappointed. I’ve been almost insanely optimistic because it seems so mad to be optimistic at the moment.

“But I think this repulsive emergence of neofascism may be a busted flush because they’re so useless at it. They’re so comprehensively crap, so all they can give us is Theresa May and Donald Trump.

“None of them is here forever. This idea that these people are insurmountable, indestructible and that we will always strain under their fatuous hegemony — no we won’t, things will change.
“They shit and one day will die. Fuck ’em.”

The Communist Manifesto by Karl Marx and Friedrich Engels adapted by Martin Rowson is published by SelfMade Hero, price £12.99

Ben Cowles is the Morning Star’s web editor. You can talk graphical novels with him on Twitter on @Cowlesz. You can also listen to the full interview with Martin Rowson in podcast form here: youtube.com/watch?v=OmEP7REmKxs.

Israeli strikes on Gaza killed up to 10 times as many civilians as eight-year IDF bombing campaign in Syria, new research finds

Britain gathered intelligence for US in order to undermine the Cuban revolution, documents reveal