Book Review Persuasive points on new politics from the left

A New Politics from the Left
by Hilary Wainwright
(Polity Books, £9.99)

THIS book is a reminder of why Hilary Wainwright is one of contemporary British socialism’s most perceptive and thoughtful writers. 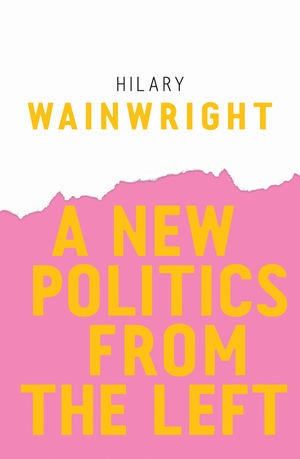 Yet, while there is much which the socialist reader will agree with and be intrigued by, hers is by no means a perfect analysis in advancing ideas about a “new politics” from the left.

In an approach that consciously avoids too much theoretical referencing, Wainwright builds up her argument through her own and others’ empirical experiences. She considers the various models that have recently challenged the relationship with the capitalist state and the profit-driven ethos of the whole globalised system.

Opening her account by exploring the politics of knowledge, Wainwright effectively juxtaposes the prevailing orthodoxies of social democracy and neoliberalism with the practical and tacit knowledge of real people.

She explores examples of where this knowledge has been used to transform, albeit fleetingly, the way organisations operate, from autocratic and bureaucratic entities to open, transformative democracies placing social good at the heart of their existence.

Helpfully, she examines examples from Britain in depth, including the radical Lucas Plan of the 1970s and the transformative City Service experiment in Newcastle during the early years of this century. Examples elsewhere include Fairmondo, the Catalan co-operative alternative to Amazon, with the author placing particular emphasis on the transformational benefits of the co-operative model.

Echoing Raymond Williams’s The Long Revolution, she positions such efforts in the broader context of the growing shift to self-determination. Correctly, she states that, even when these initiatives fail or are heavily compromised by capitalist agencies, the learning and inspirational value for succeeding generations to try again is invaluable.

In spite of individual setbacks, this slowly building movement, based on the implementation of the practical and tacit knowledge of people, is propelled by technological advances and their use as open-source opportunities, with information and insights shared in common.

But Wainwright is too astute a writer to assume that these semi-autonomous movements can automatically in themselves challenge the prevailing economic system without an equal effort to capture the commanding heights of the economy from the centre. She cites Greece as a clear example of where capitalist structures, even once controlled by a supposedly radical party, are very difficult to bend towards the will of the people.

Some would go further and cite Lenin in his On Co-operatives that such efforts may actually be counterproductive in the fight for a better society as “transforming present-day society into socialism without taking into account a fundamental question like the question of the class struggle … is why we are right in regarding … co-operative socialism as being entirely fantastic.”

Wainwright's book not only largely ignores a class-based analysis, it obliquely dismisses its application of being of any value. She approvingly records Williams as “fetishising none as more 'revolutionary than others'”, hence dismissing much core Marxist-Leninist thought and practice over the last century and more. And the Communist Party comes in for criticism, as its “attitude to popular participation and the democratisation of knowledge would often — at a leadership level, at any rate — be hostile.”

This is a shame, as an exploration of how democratic centralism leveraged disproportionate working-class material and political gains — which it still could within the looser and broader movements outlined here — might have assisted in squaring the transformative circle. Recent history demonstrates the ease with which the capitalist class infiltrates, dissipates and fragments movements that don’t have a co-ordinating centre and strategy.

Nonetheless, Wainwright's conclusions about the transformed Labour Party and Momentum’s growing influence, not only among activists and trade unionists but in securing the internal mechanisms of the party, suggest that we are on the cusp of a truly transformed socialist movement that combines coherence with front-line experimentation.

We live in exciting and hopeful times and this book goes some way to explaining why.

The autumn budget: the hard facts paint a bleak picture