The Life and Rhymes of Benjamin Zephaniah
(Simon & Schuster, £20) 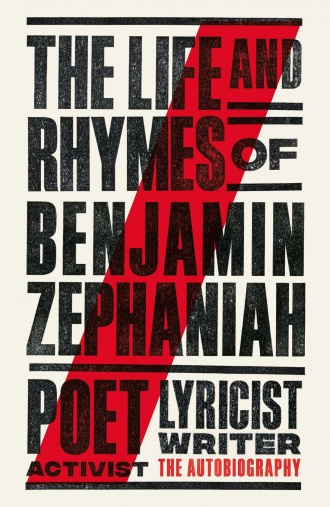 This is a beautifully penned and highly entertaining account of an intriguing life, opening us up not just to Zephaniah's story but to a wide range of topics arising out of it, from death and racism to co-operativism and male infertility.

All are tackled with down-to-earth honesty and insight, not to mention an element of gentle humour and self-effacement, intermingled with a certain amount of justifiable pride at a life characterised not just by radical intent but by radical action too.

As you might expect from someone whose first love is poetry, the words are carefully wrought. Almost imperceptibly, the language changes from the childlike phrasing used to describe Zephaniah's tough early years in Birmingham where he ran, with his mum, from a physically abusive father through to a more confident voice as he shows how he switched from the world of crime into a new and more productive world of dub poetry.

There is politics aplenty, for Zephaniah is a political man to his bones. But nothing is rammed down the reader's throat and two of the most important touchstones of his life — veganism and rastafarianism — are mentioned almost in passing and never in any preachy kind of fashion.

On the other hand, it's not difficult to discern where Zephaniah is coming from. Though a man of peace, he is rarely squeamish about the need to meet force with force or to take action to show the authorities that enough is enough, as he hints that he did in the context of the Brixton riots of the 1980s.

Still an angry man with a punk sensibility, identifying, he says, most easily with anarchism, he observes that, “when I see what people have to put up with from their governments, I'm surprised they don't rise up more often.”

As with the best of autobiographies, however, the emphasis is on good storytelling and the political messages are rarely overpowering. Instead they filter through as Zephaniah tells his tales.

From his early days in Brum to the more relaxed rural existence in Lincolnshire of his later years, he has much to reflect upon and much to tell and there are a number of moving moments in this book, one especially in relation to the despair he felt after divorce.

In his introduction, Zephaniah says: “I hate autobiographies, they're so fake.” If true, then with this one he has done something to break the mould.