Book Review 1997: A year that changed nothing

Labour came to power in 1997 promising radical change in Britain, but a new book shows how empty that pledge proved to be, says ANGEL DAHOUK

Bread and circuses: The Spice Girls perform in 1997
×

WITH a landslide Labour election victory on May 1, 1997 was the year that new Labour brought 18 years of Tory rule to an end, with Tony Blair and his inner circle promising a “new Britain,” characterised by tolerance, respect and social justice. 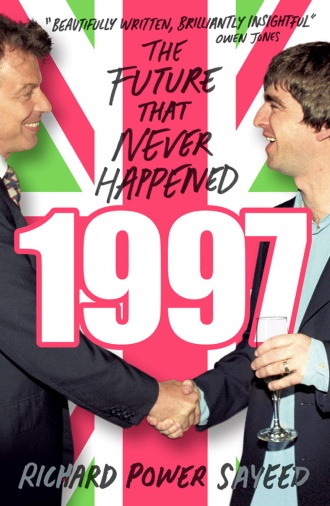 Despite appealing to ordinary working people, Blair’s social-market approach entirely broke with the Marxist tradition of the Labour Party and largely preserved neoliberal values of individual aspiration over class struggle.

This was the beginning of an era that saw, according to Richard Power Sayeed, “powerful people exploiting radical messages” without effecting any real or meaningful change.

In the seven chapters of his book 1997: The Future That Never Happened, he evaluates the events, policies and personalities that defined Britain in the late 1990s, focusing on the pinnacle year of Blair’s rise to power.

The first chapter deals with Britain’s postcolonial identity following the transfer of sovereignty over Hong Kong back to China. As the empire was shrinking, Sayeed highlights new Labour’s devolution strategy, intended to stabilise the union and satisfy demands for independence within member countries.

As Sayeed reiterates throughout, many of Blair’s strategies would later produce counter-effects beyond new Labour rule. In this case, devolution enabled a surge of support for the SNP in Scotland and a call for a referendum on independence.

The Blair government sought to make Britain’s ethnic and cultural diversity visible, but Sayeed suggests that its notion of multiculturalism was a “simplistic representation” and “studiedly apolitical.” He gives the example of a marimba synth rendition of the British national anthem commissioned by the government and showcased at a Commonwealth meeting.

The book continues with an extraordinary account of the Stephen Lawrence inquiry and the fight against institutional racism within the police force and wider society in Britain. Sayeed details how Doreen and Neville Lawrence worked with the mainstream media to raise awareness of the injustice of their son’s death and police mistreatment of the case.

The Daily Mail’s MURDERERS headline is often applauded on all sides for calling out the five young men responsible for Lawrence’s death, but Sayeed reminds us of the opportunism of “white media types” seeking to demonstrate their “politically correct” credentials.

In fact, rather than challenging racism, Daily Mail editor Paul Dacre focuses the accompanying article on how five arrogant men undermined British law and order, suggesting that his sympathies lay with the police over and above the victim.

While it would be impossible to entirely overlook the death of Princess Diana, Sayeed is perhaps overgenerous in granting the British monarchy a full chapter. Three further chapters focus on the pop culture of the time, as exemplified by the Spice Girls, the YBAs and Britpop.

Entertaining as they are are, they do little to strengthen the central argument that those in power “absorb marginal ideas, soften them and exploit them” to maintain the status quo. A better option might have been to expand the final chapter on the spectacular failure of Gordon Brown’s so-called welfare capitalism.

Filled with fascinating accounts of political and cultural events and movements, it is a pity that so much of the book is given over to a tireless level of unnecessary detail. Simon Fuller is “usually tanned, generally in a smart suit – without a tie – and notable for his black hair,” while Damon Albarn is “a cute and skinny indie kid with eyes that glinted under heavy brows.”

Without the irrelevant and long-winded anecdotes, the book would be half the size but doubly convincing.