FEMALE trade union official Paula Lamont was hounded off a Bectu Picturehouse picket line by a mob on International Women’s Day, the Star can reveal.

Lamont, who is an elected member of Bectu sector executive committee (SEC), said that, while she is normally a confident person, the “completely one-sided and unprovoked” incident had left her “really shaken.”

In footage captured at the Piccadilly Picturehouse Central picket on March 8 and seen by the Star, Lamont is surrounded by protesters, who had joined the picket and are believed to be entirely unconnected with Prospect/Bectu, and was shouted and sworn at. 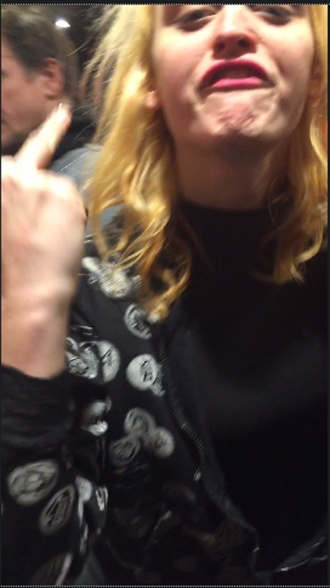 The activists can be heard shouting: “Terf! Terf! Terf! Get her out of here, she’s a Terf,” which is an acronym for “trans exclusionary radical feminist” and is commonly used as an insult towards women who question proposed changes to the Gender Recognition Act (GRA).

Lamont says she felt so intimidated she had to leave the picket for her own safety. 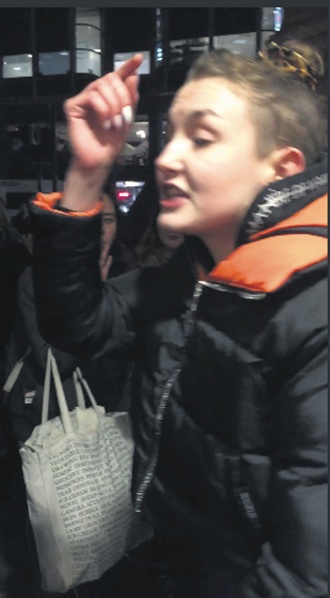 She believes that the attack was connected with her being recognised as having attended a meeting about the planned changes to the GRA held by A Woman’s Place UK (WPUK) in London on February 27.

She said: “What upset me most about the incident is, out of the very big crowd which surrounded me and witnessed a completely one-sided and unprovoked attack, not one person felt inclined to intervene. It was a really shocking example of mob mentality. At no point did I say or do anything which could have been construed as aggressive or offensive.”

One of the activists visible in the footage of the incident appears to be a transwoman called Tanis Wolf, also known as Tara Flik Wood, who is facing court action for an alleged physical assault on a humanist celebrant and former Morning Star employee Maria MacLachlan at a separate event to discuss the GRA organised by radical feminist Venice Allan in September last year. Wolf can be heard shouting: “Terf, terf, tell your mate Venice to fuck you,” while sticking up a middle finger. 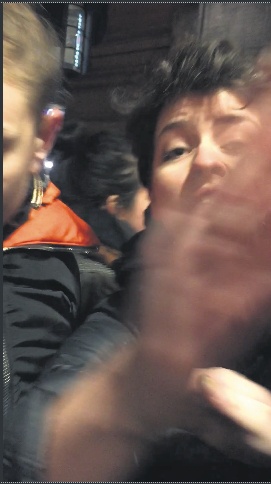 Lamont says she has never met Allan, who is the organiser of another campaign called the We Need To Talk UK and Ireland Tour which also discusses the impact of the GRA changes.

She said that as a trade unionist she had wanted to attend the WPUK event, which was held under tight security to prevent disruption, to hear what other union activists on the panel had to say about the possible effect of any new legislation.

“I was attacked purely for being identified as having attended A Woman’s Place UK meeting,” she said.

“As a female trade unionist, I believe it is my responsibility to understand as much as I can the impact of the proposed changes to the Gender Recognition Act and how the new legislation may affect women in the workplace and their rights. I felt the WPUK meeting, which was also attended by many other leading trade union women, would be the best place to hear women’s concerns.”

Prospect general secretary Mike Clancy said of the incident: “We resolutely condemn the intimidation and harassment of our members taking part in union action. We appreciate the widespread support for members involved in the Picturehouse dispute, but we want to remind all supporters that this is a lawful industrial dispute about the pay and conditions of our members and should not be used for any other purpose.”

LGBT secretary for London FBU Lucy Masoud, who was one of the WPUK speakers, said: “I utterly condemn the attack on this female trade union member. The fact that it was an attack on a picket line while she was defending the rights of other workers is absolutely disgraceful.

“I’m aware that the reason this woman was attacked was her attendance at a WPUK event, a legitimate organisation that had been discussing women’s rights to safe spaces, and I condemn the actions of these mindless thugs.

“I call on other unions, specifically women’s sections, to come out and condemn this kind of behaviour towards our female members.”

Former Sertuc regional secretary Megan Dobney, who chaired the event, said: “Activists would better use their time supporting workers’ industrial disputes than disrupting them with their own grievances.”

RMT executive member Eddie Dempsey and friend of the victim said the incident was “a complete disrespect to our movement. There are only two sides to a picket line.”

“Women are being no-platformed for expressing their opinions in their own movement and this is wrong.

“This sort of behaviour completely undermines the picket. If something like that happened on one of our pickets, the employers would be jumping for joy.”

Dempsey said that women in RMT, which has a 15 per cent female membership, had expressed concerns about changes to the GRA and that general secretary Mick Cash had been asked to provide a report about the possible impact.

“They are asking questions about what it will mean for employers’ responsibilities to female workers and the need to provide female-only spaces,” he said.

Dempsey said he thought, “as a whole, the trade union movement has ducked the issue” of the GRA and that “people were afraid of speaking out.”

“The general feeling is that people are hoping this is going to go away, but it’s not going to.

“We have to make sure as a trade union movement that we have the ability to fight sex discrimination and defend women at work,” he said.

“We are appalled to learn that a woman has been subject to harassment and intimidation simply because she attended one of our meetings.

“The incident is all the more shocking because the woman in question was a trade union official and was driven away from her own union’s picket line by non-union members hurling abuse at her.

“This is an attempt to intimidate women taking part in public debate and trade unionism. It should be condemned unreservedly.”

The Bectu Picturehouse dispute is part of a long-running campaign for the living wage and sick pay for staff. It has received widespread support, including from Labour Party leader Jeremy Corbyn.

Speaking to the Left Foot Forward website earlier this month, Corbyn said: “I fully support your campaign to be paid the real living wage and to tackle the injustices that you face in your workplace.

“On International Women’s Day, it is right that we recognise that women are disproportionately affected by poverty pay and strengthen our resolve to tackle it.”

It is understood that TUC general secretary Frances O’Grady had visited the picket and paid tribute to the striking workers prior to the incident.

Hinch hopes to do it all over again

Retaining title could be easy for ‘chilled-out’ Peaty

Three-quarters of fans feel ready to return to football stadiums