THERE was a small news story earlier this month that nine soldiers had been found guilty of the murder of Victor Jara, the theatre director, poet, singer-songwriter and political activist. 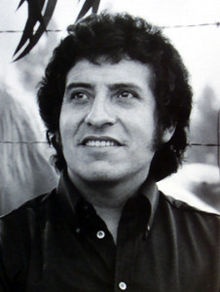 Not many people noticed the story on my social meeja — only Catalina, whose family are from Chile, and Gordon — a principled socialist, who’s long found the biography Unfinished Song: The Life of Victor Jara by his wife Joan an inspiration — discussed it.

The murder happened in 1973, when Jara and 6,000 others were held in the Estadio Chile sports stadium. Chilean journalist Miguel Cabezas, who described the events for University Review in the US, wrote: “They took Victor to the table and ordered him to put his hands on it. In the hands of the officer rose, swiftly, an axe. With a single stroke he severed the fingers on Victor’s left hand, and with another stroke, the fingers of the right.

“A collective outcry from 6,000 prisoners was heard. These 12,000 eyes then watched the same officer throw himself over the fallen body of singer and actor Victor Jara and begin to hit him while shouting: ‘Now sing, you motherfucker, now sing.’

“Jara received more blows but raised himself and walked to where the arena and bleachers met. There was a deep silence. And then his voice was heard crying: ‘All right comrades, let’s do the senor comandante the favour.’

“He steadied himself for a moment and then lifting his bleeding hands began to sing with an unsteady voice the anthem of Unidad Popular. And everybody sang with him. A volley was fired and Jara fell dead. Then another was aimed into the bleachers at those who’d accompanied him in song and bodies tumbled down the inclines.”

Jara’s last poem, Estadio Chile, was smuggled out in the shoe of a friend.

“We are 5,000, here in this little corner of the city.
How many are we in all the cities of the world?
All of us, our eyes fixed on death.
How terrifying is the face of Fascism
For them, blood is a medal,
carnage is a heroic gesture.
Song, I cannot sing you well
When I must sing out of fear.
When I am dying of fright.
When I find myself in these endless moments.
Where silence and cries are the echoes of my song.”

The Stand Up and Spit blog, standupandspit.wordpress.com, focuses on the ranting poetry of the 1980s, working-class poetry and the politics and music of the time to give context and on it there are several posts about Victor Jara.

History is important because looking back illuminates the future. The history of working-class culture and struggle is important because it is often obscured. When we look at what actually happened, as opposed to the story we’re given, we have the opportunity to ask: “Why was it obscured?” This recently includes Hillsborough, Orgreave, Spy Cops and National Insurance blacklists.

Jara was targeted not because of who he was but because of what he was. My friend Catalina told me: “Victor Jara is more than just an example of the brutality of fascism against the human body when it is given free rein. He was tortured and executed for what he believed in — a fair and just world for all workers, indigenous people and campesinos.

“As part of the Nueva Cancion (New Song) movement he elevated and inspired these normally marginalised sections of South American society to step out from under the control of the elites. This is why he, alongside so many other Chileans died, for being part of a wider movement that wanted a fairer and more just society.”